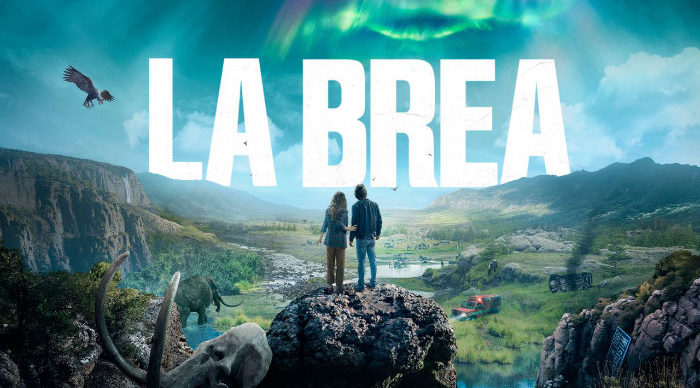 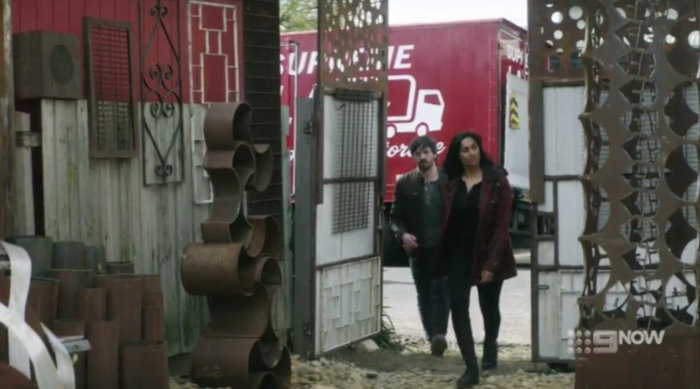 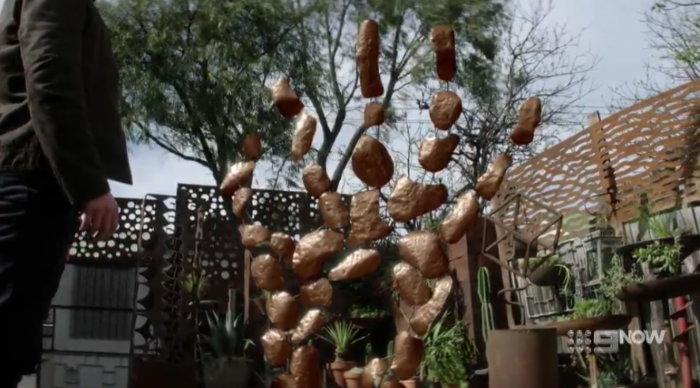 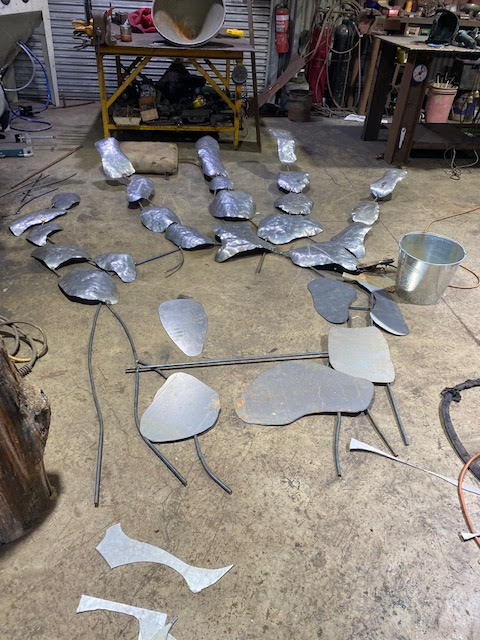 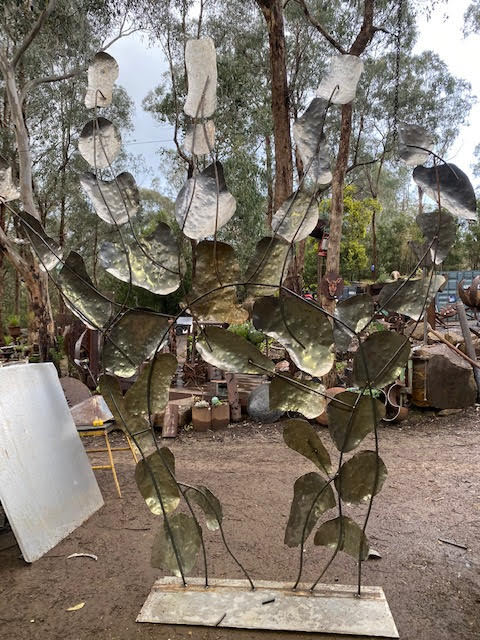 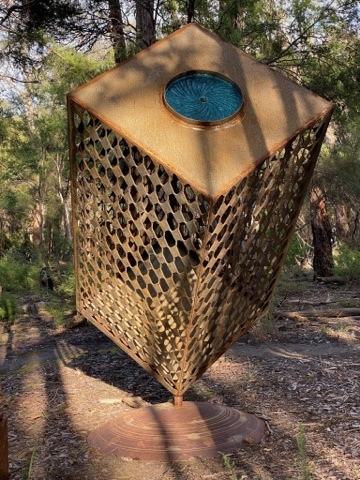 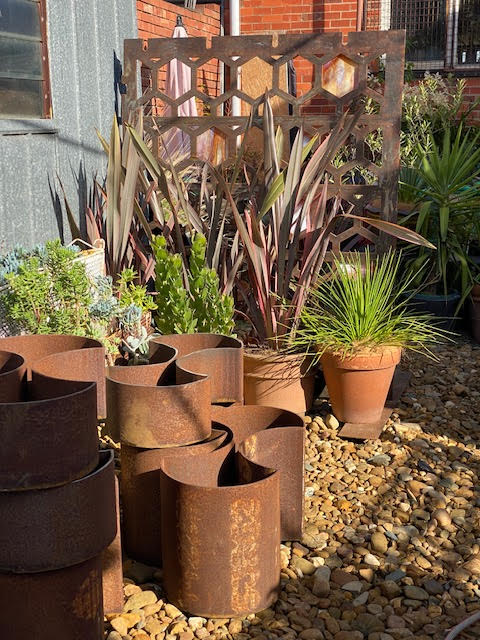 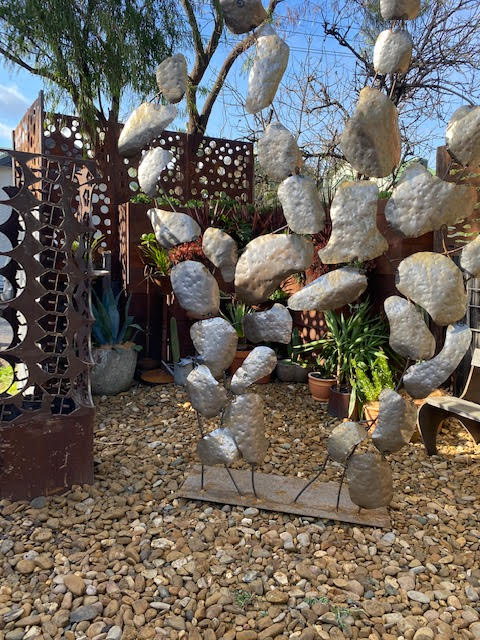 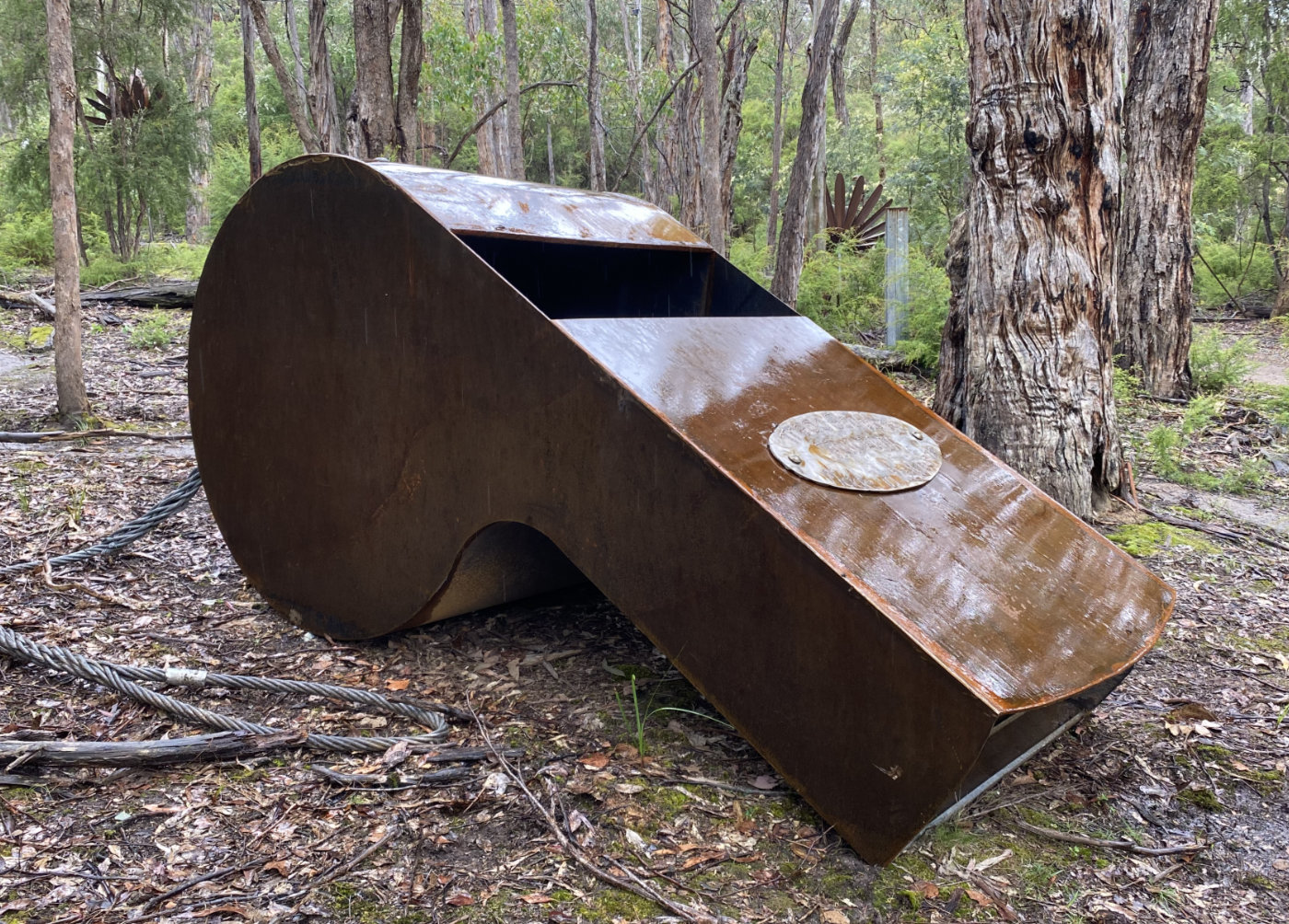 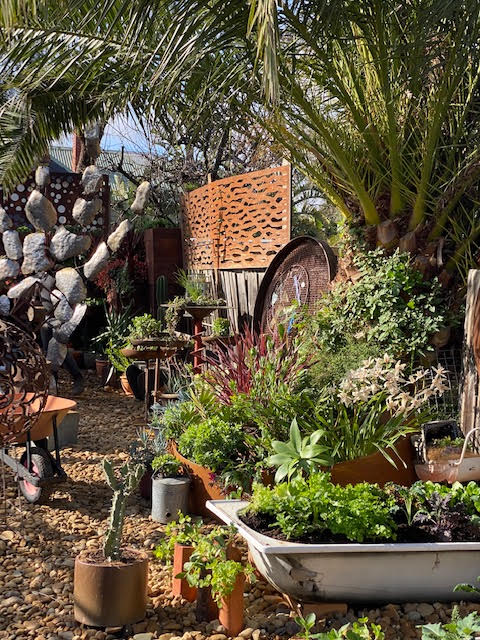 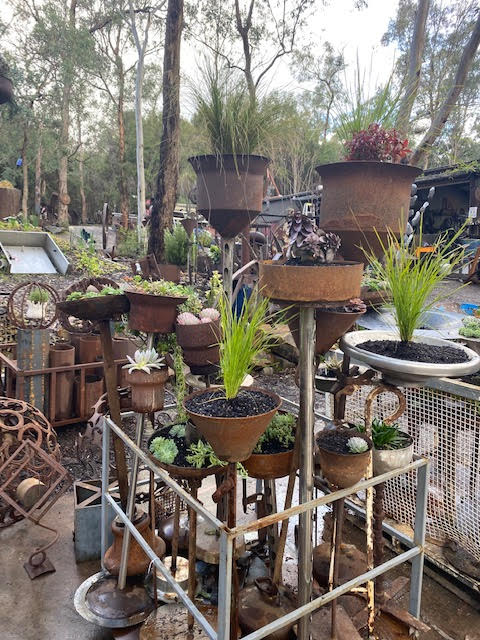 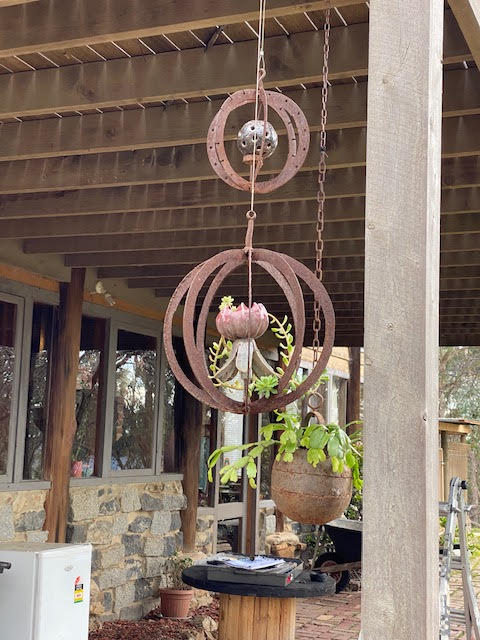 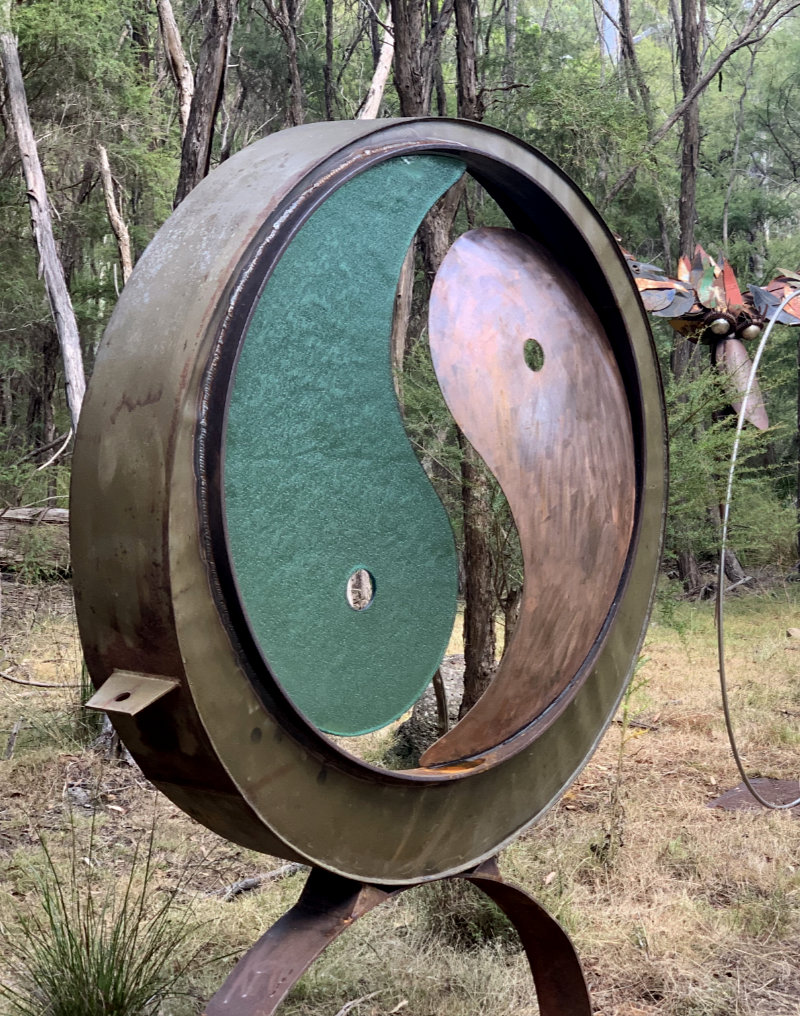 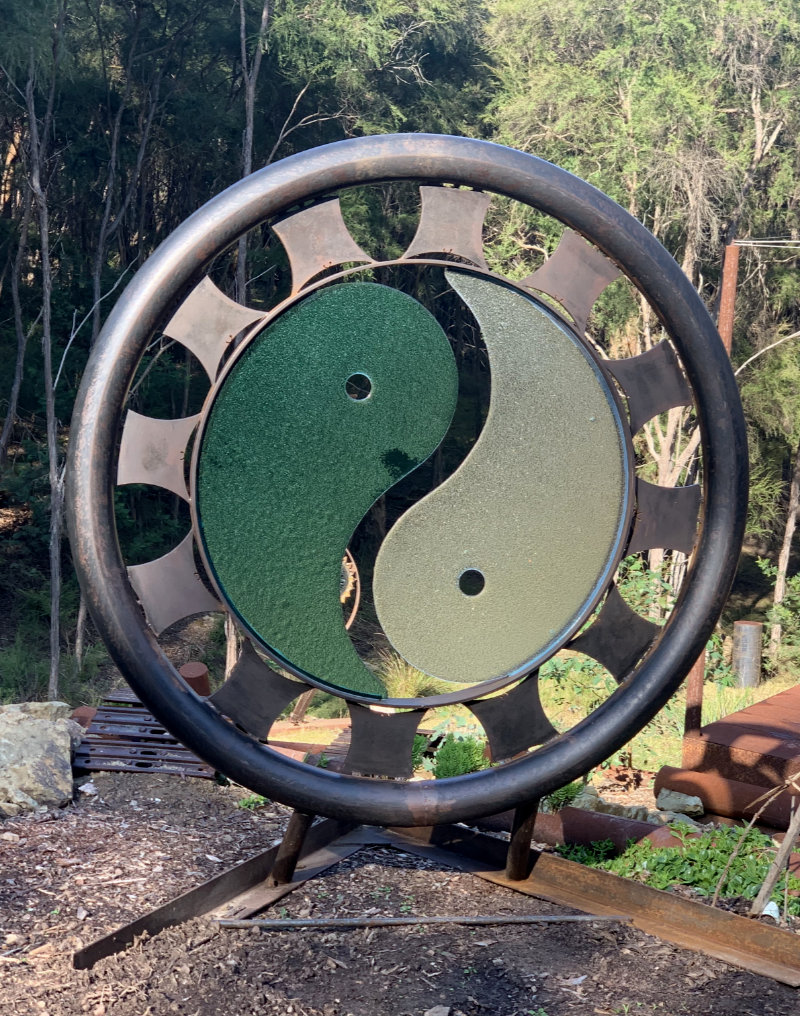 We’ve worked with Tread Sculptures for many years and have seen hundreds of glorious metal flowers, birdbaths, light bollards, fire pits, commercial sculptures and quirky characters come and go. This busy studio sells work Australia-wide. For those lucky enough to visit in person, Tim maintains an extensive sculpture trail around their Bend of Islands property.

Now international audiences are seeing some Aussie creativity behind the scenes in sinkhole drama La Brea. We asked Tim about delivering on this unexpected television assignment.

Last year Tread Sculptures hired out truckloads of artworks to the production team filming US TV drama La Brea. How did that come about?

I had a call from a local lady saying that she was working doing all of the green dressing (plants) for the production of La Brea, and that the senior set designer required a sculpture to be made. She asked if I was interested. I said that I was and the senior set designer/buyer called me five minutes later and arranged to come out to the studio the next day.

By the end of that visit I had quoted on building two custom sculptures and hiring out an additional 50 plus pieces of artwork including sculptures, sky gardens, planters and screens.

Once you committed to the project how much work was involved?

Building the one-off pieces was a real process. The drawings to reference the build were basic sketches with minimal information. The process was to do a certain amount of the build, then photograph it and send it to the production team who would critique it and give me feedback for future direction. This communication was happening at 4pm each day then I was straight back in the studio to work on the revised details.

Whilst that was happening we were cataloguing photo references and moving all the work to be hired out to our concrete pad ready for collection. This was all within 10 days of the first phone call.

That was for the big hand sculpture scene that was a key reveal in episode 7. It was shot in Seddon, an inner suburb of Melbourne.

As soon as that episode had been filmed for Ella’s workplace, the senior set buyer/designer was back out to pick another 80 plus pieces for Ella’s house scenes being filmed in Christmas Hills, which is fortunately quite close to my studio. This hire lot included some big sculptural pieces that needed to be lifted into position by machine. The selection was hired over a 3 week period to shoot episodes 7 and 8.

In terms of work and effort the whole thing was intense and really reactive. This included quoting, sculpting, cataloguing, adding and subtracting pieces, documenting loading work going off site and then checking it back in on site, and invoicing.

We had to be really organised and communicate really well. The senior set designer was a really good communicator and answered text message questions within minutes, and just dealing with one person simplified things.

Ultimately it was very full on and required heaps of work, but it was also exciting and paid well.

US audiences are large compared with Australia. What was the audience there for Season 1?

Season one in the USA had 47 million people watching and apparently it was most popular in the 18-25 age bracket.

Does Tread Sculptures get a credit anywhere? Could a La Brea fan track you down and buy a sculpture from the show?

I’m not sure if I get a credit, but I did get a nice note from the producer saying how appreciative they were of our artwork. Yes, I still have a number of pieces for sale that were hired out.

Season 2 will also be filmed in Victoria, reportedly adding $100 million to the economy and supporting more cast, crew and local businesses. Would you participate in something like this again?

I am hopeful that Season 2 still includes the character of Ella the metal sculptor and that they require more pieces. Either way, it’s good to be on their radar now and know that they have confidence in our ability to provide what they need in a timely and organised way.

Saying yes to this work was definitely a big call at the time, but it was so good to experience and great to know that we are capable of pulling it off. 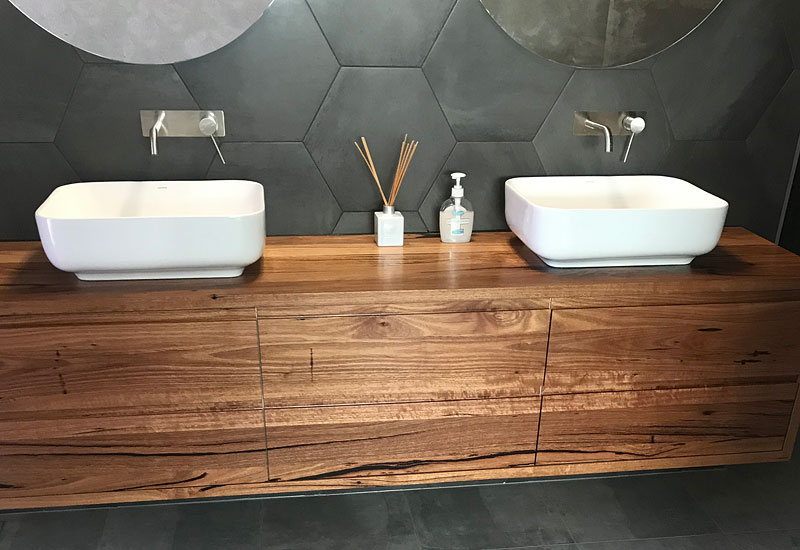 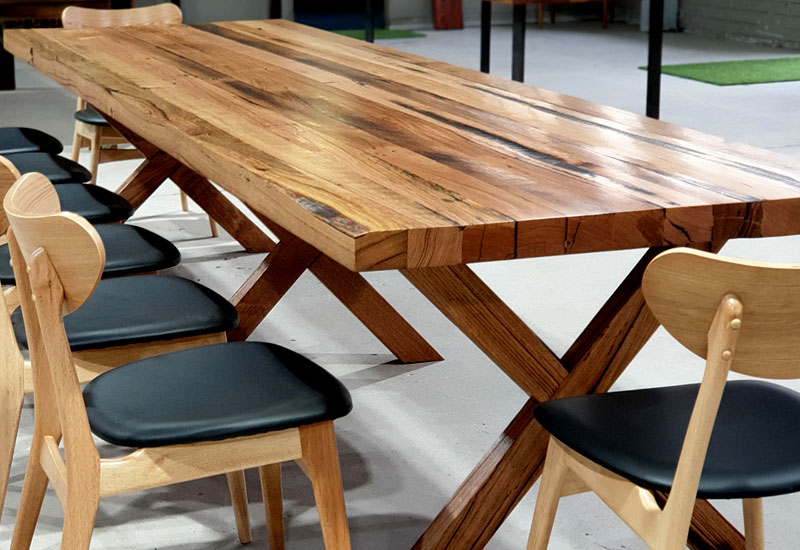 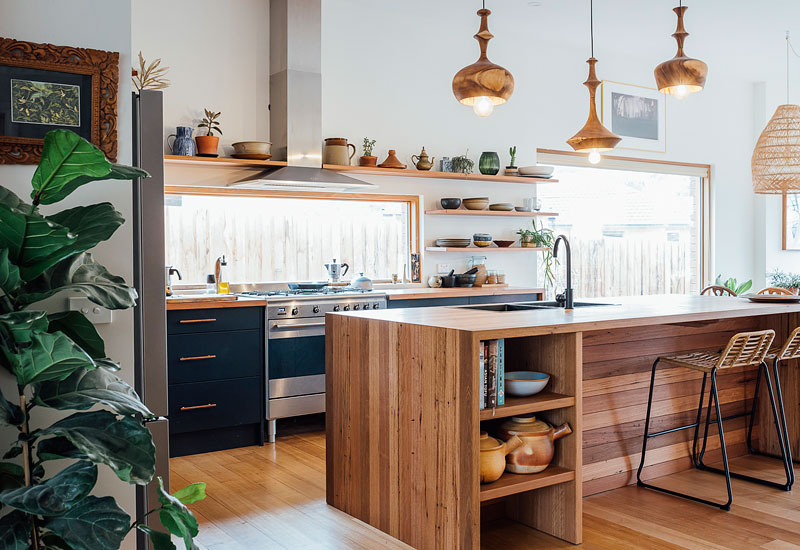