I visited Saltmarsh several years ago and thought it was one of the most beautiful galleries I’d seen. A few weeks ago I recognised the building and location in a new guise and was just as impressed.

Saltmarsh is now boutique holiday accommodation and, with the inventive Hancocks still at the helm, the conversion blends seamlessly with the upcycled essence of the original build. Old, new and custom-made fittings combine in a gorgeous, relaxed living space that’s a perfect example of sustainable modern living. 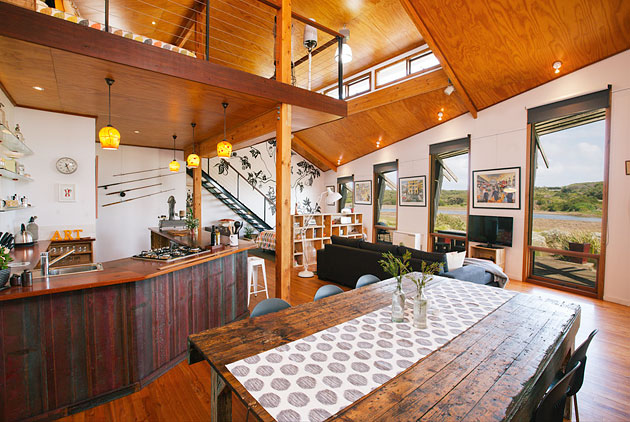 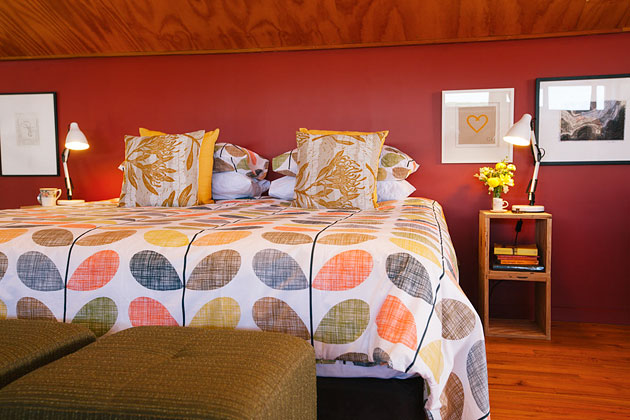 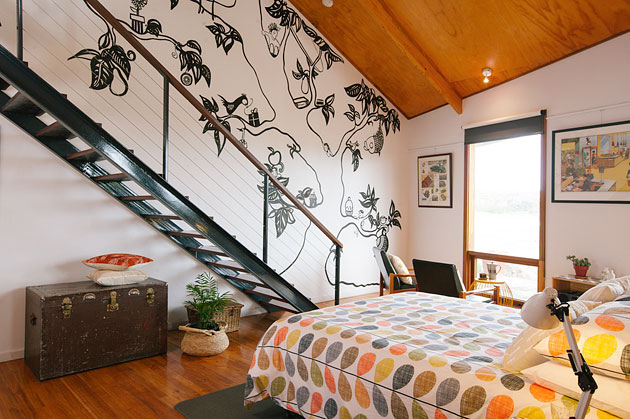 Glass artist and builder, Glenistair Hancock, shares the back story of the recycled materials below:

“The story of Saltmarsh has now had a couple of reincarnations. It started out as a studio/gallery, then moved into studio/gallery/cafe, then with a break in between of 12 months where Tina, myself and the three boys headed off to Europe and travelled around in a kombie van taking in the sights, we came back and opened again as a studio/gallery and just coffee! Now it is a studio/accommodation. The gallery side has been converted into a large apartment-style boutique space.

The building was constructed in 2004 from as many locally reclaimed materials as possible. We bought the original holiday house of David Jones, the son of Fletcher Jones, in Port Fairy. As the owners of the land wanted the house gone in two weeks I had to pull it down bit by bit and truck it back to Warrnambool in my father-in-laws farm truck. Cedar windows, beams and rafters were all used in Saltmarsh. The beams and rafters were milled and made into new windows and doors (after I had painstakingly de-nailed and run a metal detector over the timber). Pine flooring, lining boards and framing timbers were all reused. Copper guttering was flattened out and used as interior cladding. Cedar weatherboards, red gum stumps and thousands of meters of decking were all used again.

Two sets of large timber barn doors used as studio entrance/feature doors and garage doors came from the Warrnambool Water Works building, due to be demolished.

All the bearers, joists, posts, railing and some decking came from the historic cypress tree located at the original Cobb & Co Coach stop into Warburton. The tree was over 100 years old and was felled just prior to our construction commencing.

Red pine fascia boards came from an old motel in Warrnambool and supplied us with the materials to construct staircase steps and handrails, balustrade handrails, reception desk and all the cafe tables. (This was a really great find, Red Pine hasn’t been available from Australian forests since I think the 20s. I’ve seen it advertised for around $50 a meter, I got about 300 metres of 12 inch x 2-3 inch for $400).

The steel staircase and balustrade were made by my father-in-law and myself up on the farm. I did the cutting, he did the welding (a very good arrangement!)

One day I was going past the Fletcher Jones building here in town when I noticed a truck in the parking bay loaded to the hilt with stuff, GOOD STUFF!

Fletchers had closed down and there had been a sale and there were a couple of fellows cleaning up the factory of all the things that were left over. There were literally truck loads of things left, all the stuff was either going to the tip or to the recycler. I spent the next week going through the factory choosing all the things I thought were pretty cool and Tina thought were pretty useless. So with an assortment of old clocks, mannequins, ladders, trolleys, fans, chairs, signs, sewing bobbins, scissors, and even the old Grey Nicolas cricket bat used during smoko for a quick hit, I had myself an instant collection. I kind of think it’s a once in a life time find of Stuff!

A lot of this ‘stuff’ has now found its way into the Saltmarsh accommodation lay-out. Tina has a great eye for curating my stuff and putting it to use. I have an eye for finding things and sitting them in my shed. Along with a few treasures found in Europe on our 12 month journey Saltmarsh now has this eclectic charm. One person looking through summed it up well I thought, she stated it looks like what you might find in a New York apartment. True, except the view is of a tidal wet land, inhabited by dozens of different bird species, marsupials and flora, re-vegetated by us with over 2000 indigenous plants. And to frame in the view we have ancient sand dunes and Aboriginal middens as the back drop.” 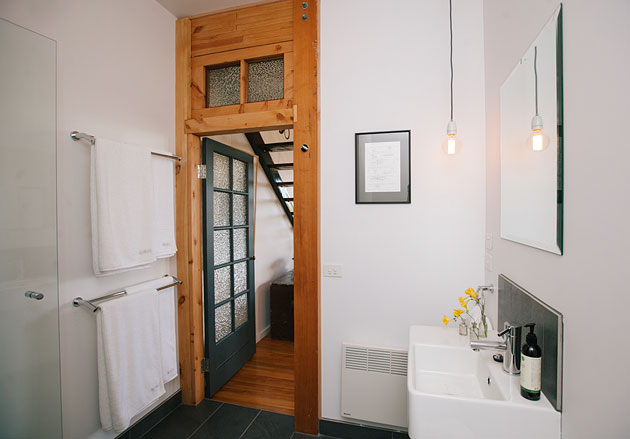 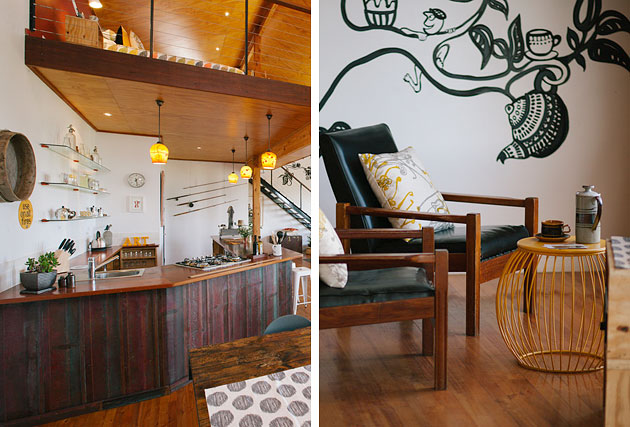 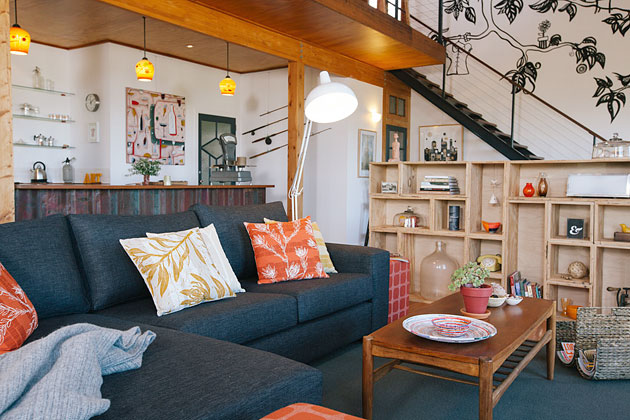 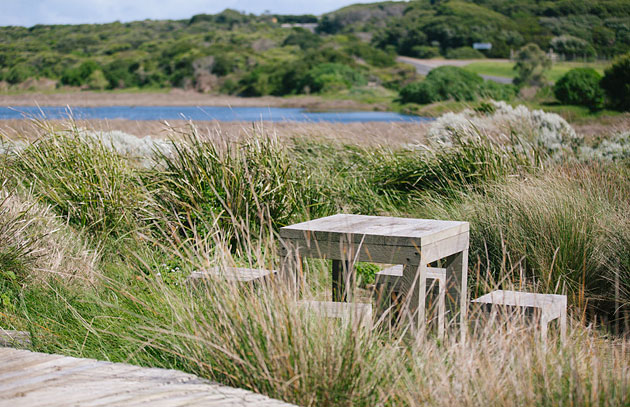 So many bits and pieces and such a great result! Recycled materials may require more time and thought to incorporate but once their stories are woven into a structure you can feel the attachment and sense of achievement they give the builder. A hands-on project like this almost becomes part of the family.

I’m also impressed with the flexibility of this build. The Hancocks have been able to adapt and change Saltmarsh to suit each stage of their business and family life, making it a productive long term investment.

Inexpensive materials, creativity and hard work can be an amazing combination. I hope every visitor to Saltmarsh is inspired to look at old ‘stuff’ with new interest. 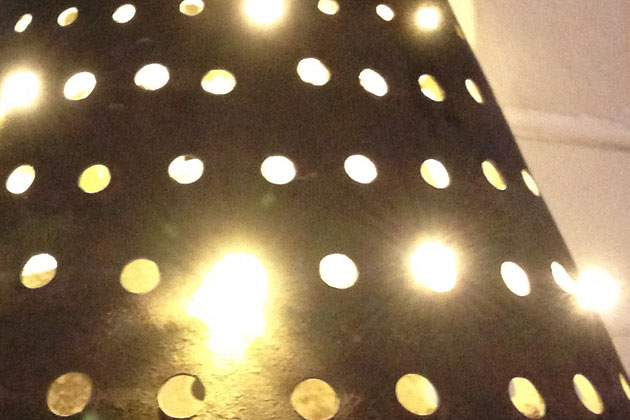 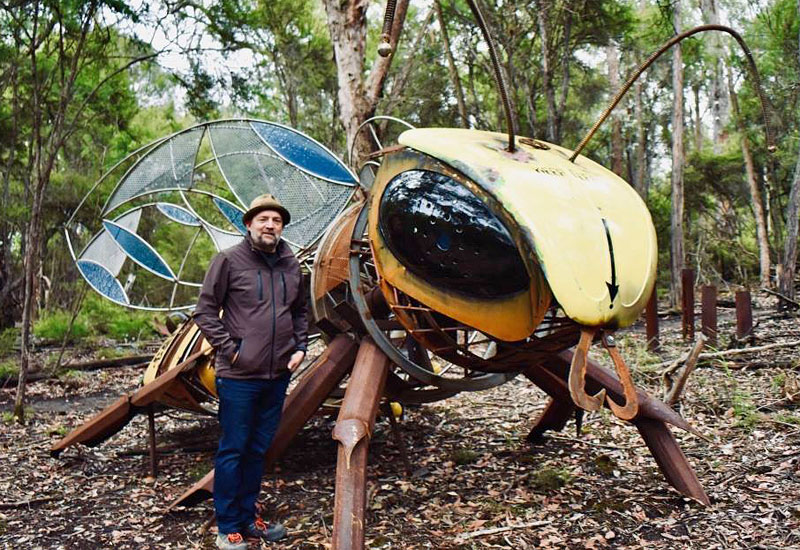